The Aliathon Resort offers a unique philosophy that guides everything we do and ensures a home away from home for all of our future generations.

Established in 1992 with the opening of 52 apartments, the Aliathon has now grown into a holiday resort with a total capacity of 459 rooms/apartments and suites and an extensive and enticing array of services and facilities.

Aliathon was the dream of five brothers and sisters, the Philippides family.Today ownership remains with their families who have a stronger than ever commitment to offer a superior service and a personal touch oriented to the traditional Cypriot culture and green environment. With a wealth of experience and an enviable reputation for quality of service, Aliathon Resort will guarantee customer satisfaction and excellent service ensuring an unforgettable experience. 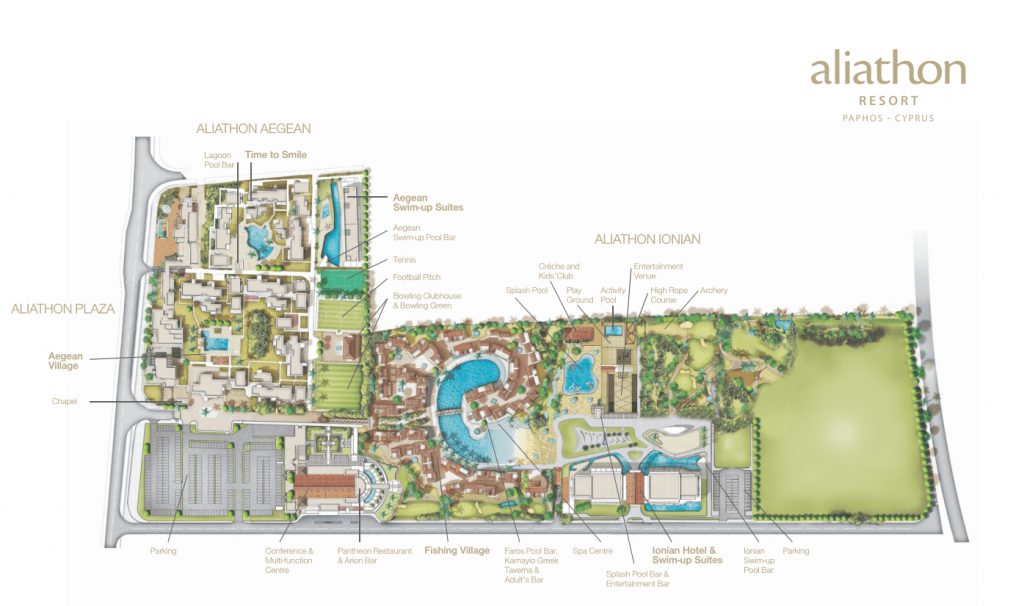 The Aliathon Resort is located in the heart of the Paphos tourist area, easily accessible to the harbor and town. Paphos is a small picturesque town is situated on the west coast of Cyprus and stretches from the beautiful Akamas peninsula in the north-west across to Aphrodites rock in the east. It is steeped in history

having been the capital of Cyprus in certain ancient times and it attracts thousands of visitors every year. In Paphos there are innumerable sites of historical, religious and cultural interest and it is included in UNESCOs list of World Cultural Heritage sites.

Aliathon Resort is located in the heart of Paphos tourist area, it is ideally located close to the below places of interest that you can visit while staying with us.

The mosaic floors of these noblemen’s villas dating from the 3rd to the 5th centuries A.D. are considered among the finest in the eastern Mediterranean. Depicting mainly scenes from Greek mythology they were discovered accidentally in 1962 by a farmer ploughing his field. The mosaics at the House of Dionysos depict the god of wine while the House of Thyseus is names after a mosaic showing the ancient Greek hero brandishing a club against the minotaur.

The “tomb of the kings” are situated close to the sea in the north western necropolis of Paphos. They owe their name to their size and splendor – some probably belonged to the Pafian aristocracy, and not because royalty was buried there. They are rock cut and date to the Hellenistic and early Roman periods. Some of them imitate the houses of living, with the rooms (here the burial chambers) opening onto a peristyle atrium. They are similar to tombs found in Alexandria, demonstrating the close relations between the two cities during the Hellenistic period.

It is a small 2nd century Odeon built entirely of well-hewn limestone blocks. Today it is used in the summer for musical and theatrical performances.

The fort of Nea Pafos (Paphos) is located at the west end of the harbor. It was built during the Frankish occupation in the 13th century in order to replace the Byzantine castle of ‘Saranta Kolones’. The fort only has one entrance on its east side and very small windows. Its main part is a big square tower that has an enclosed courtyard in the middle. The Venetians dismantled the fort in 1570so that the Otttomans, who had begun their conquest of the island, would not use it. According to a Turkish inscription placed above the entrance the Ottomans rebuilt the fort in 1780. Nearby are the ruins of a second fort, which was probably built in the same period.

The history of the monastery of Agios Neofytos is well documented in the autobiography of its founder, the Cypriot hermit and writer Neofytos. It is built in what used to be a secluded location at the head of a picturesque valley, about 10 km northwest of Pafos (Paphos). The ‘Egkleistra’, an enclosure carved out of mountain bu the hermit at the end of the 12th century, contains some of the finest Byzantine frescoes from the 12th to the 15th centuries.

The later monastery church contains some of the best examples of post – Byzantine icons of the 16th century, and there is also a very interesting ecclesiastical museum.

This interesting geological formation of huge rocks off the southwest coast in the Pafos (Paphos) district forms one of the most impressive natural sites of Cyprus associated with Aphrodite, the Greek goddess of love and beauty.

According to legend, this strikingly beautiful spot is where Aphrodite rose from the wave and the foaming sea and was then escorted on a shell to the rocks know as ‘Rock of Aphrodite’ or ‘Petra tou Romiou’ in Greek. The Greek name Petra tou Romiou, ‘the Rock of Greek’, is associated with the legendary Byzantine hero, Digenis Akritas, who kept the marauding Saracens at bay with his amazing strength. It is said that he heaved a huge rock into the sea, destroying the enemies ships.

Location
25km east of Pafos – along main road to Limassol

A masterpiece of nature, Avakas Gorge is situated in the unspoilt Akamas peninsula in northwest Pafos. A trekker’s paradise, it offers spectacular views and a generous introduction to local flora and fauna, including the endangered centauria akamantis and endemix plant found only in the gorge. Carved out of limestone rocks, rising up as high as 30 meters and narrowing dramatically at one point, the gorge is a fairly difficult hike as the rough track winds its way along and over the stream that formed this natural wonder over thousands of years.

This beauty spot is situated past the fishing harbor of Latsi towards the tip of the Akamas Peninsula. A natural pool grotto surrounded in greenery, the site lies at the end of a small nature trail. As it names suggests the grotto is said to be where the goddess of love used to bathe. Myth also has it that this is where Aphrodite met her lover, the handsome Adonis, when he stopped off for a drink while hunting. The moment he drank the water, Adonis fell in love with the goddess.

Adonis baths, with its two level waterfalls, is a beautiful little paradise which is really worth visiting. This is where Adonis the lover of Aphrodite used to bathe, according to Greek mythology. Here you will have the opportunity to swim in the refreshing mountain waters.

Nothing reveals the spirit of a country more than a market, so make sure you find time to visit one during your stay in Pafos. The main market in the Pafos – Ktima area is the covered municipal market know to the locals as the “Agora”. Unlike local markets in towns the municipal market is open every day except Sundays.

0 Location(s) found near you